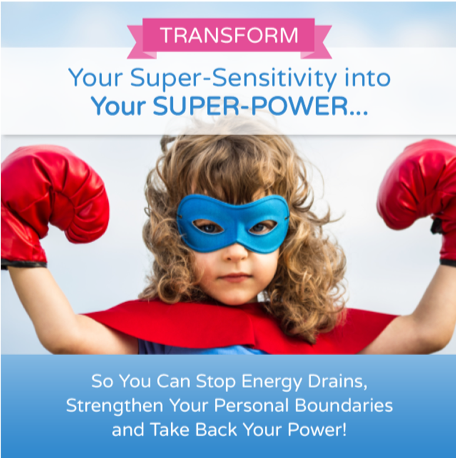 Transform Your Super-Sensitivity
into Your SUPER-POWER…

So You Can STOP ENERGY DRAINS,
Strengthen Your Personal BOUNDARIES
and Take Back Your POWER!

Is this happening to you, too?

If you answered YES to any of these, you may be what some are calling a Highly Sensitive Person, or even an Empath (someone who is exceptionally sensitive to other’s energies). 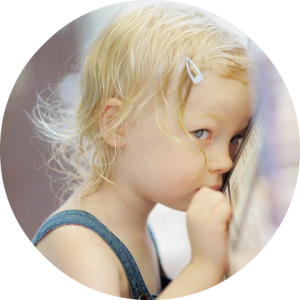 While super-sensitivity could be your greatest gift, it may feel way more like a curse UNLESS you learn how to manage and refine it!

I know all too well, as I am definitely in this category. I would even say I am even an “extreme emotional empath” as I often suffered from feeling practically everything — pain, sadness, anger — in my own body!

Now, I wouldn’t trade this empathic sensitivity for the world, as it is my greatest intuitive healing asset! I can literally feel energy blockages and also facilitate the release in both people and in animals, anywhere in the world — and so can many of my students — and very possibly, you too!

So, I am thrilled to finally teach you invaluable cutting-edge techniques to help you discharge the negative vibes you may pick up from others, make separations from others so you are no longer drained and fatigued, and create strong energetic boundaries so you can refine your intuitive clarity and hold the highest blissful vibrations.

I learned to stuff my feelings and ‘numb out;’ maybe you can relate…

Growing up with three siblings was, at times, so raucous that it was torturous for me. I felt I had to seclude myself a lot and had to “toughen up” my skin… kind of like creating a protective armor. I was so easily hurt or saddened by what others said or did.

Don’t get me wrong, I didn’t have a horrible childhood. I didn’t know it then but I was extremely sensitive to all kinds of subtle sensations, like other’s emotions, physical pain and even their thoughts. Even watching TV often made me cry.

Raised in a very brilliant scientific family, much of the sensations and emotions I felt were not “rational” and therefore largely ignored or even mocked. I soon learned to stuff these feelings and “toughen up.” I tried to numb out the constant “noise” I was feeling and over time I just repressed much of it.

Much of what I was feeling was NOT even MINE!!

Then, when I began my spiritual and healing journey, over three decades ago, I found I had a boatload of unprocessed emotions stored up. It seemed like a never-ending black hole of tears for no real reason, and I cried daily as I began to release them, like an emotional detox river. As my spiritual and Reiki energy healing practices began to peel away the onion layers of repressed emotions, I also noticed much of what overwhelmed me was NOT EVEN MINE!

At first, it felt like a huge relief just to understand that much of what I was feeling was not mine. As I began to clear the backlog of emotions, I noticed I was also becoming way more aware and my intuition really opened up!

I won’t lie — my extreme sensitivity has been a real roller coaster ride. It all came to a head when four hurricanes hit Florida in a few weeks… I was devastated physically and emotionally. I literally felt like the hurricanes happened inside me…

I tore my rotator cuff and still had to board up several houses and evacuate; my adrenals and my hormones were completely depleted. I was in constant pain, barely able to sleep and barely functioning for over 6 months.

You teach best what you most need to learn… 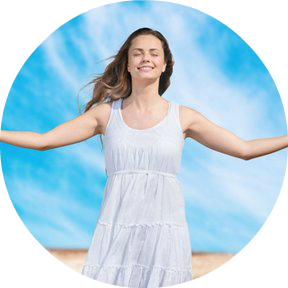 I knew I had to get serious about how I wanted to be in the world as an energy healer, because I couldn’t go on like this anymore. I was tired of getting knocked out at the supermarket, not knowing who or what was sapping my energy and strength. It was no longer an option to close off my feelings and my heart center, as I worked too hard to open them back up.

So, even though three chiropractors told me it was the worst torn shoulder they had seen and I needed surgery, I decided to dig deeper into my own personal healing.

I also got lots of help and insights from other healers and body workers and my shoulder healed without surgery. One astrologer told me that while it indeed was my most devastating period of my lifetime; ultimately my healing power would increase 10X!

That gave me something to hang onto in my darkest hours and what I had to learn the hard way has now also served as a REAL SHORTCUT for anyone struggling with Sensitivity.

The techniques I learned have supported many sensitive healers, coaches, body workers, intuitives, meditators, therapists, health practitioners and spiritual seekers to expand their awareness, open their heart centers, and serve with much greater impact and effectiveness, while feeling much more empowered and less drained, too!

Now, my sensitivity has become an awesome gift — a “super-power” if you will! It has enabled me to connect with great Beings of Light, archangelic realms and ascended masters for divine wisdom downloads while still remaining grounded and centered. I can feel what is going on with people and pets, even at a distance, without “taking it on.” And the same techniques I used to heal myself, I have taught many other healers, coaches and caregivers as well!

Let me help you, too…

In this unique and invaluable training I will teach you the exact steps you need to take to shift from being overly impacted and sensitive to increasingly intuitive, energetically protected and empowered!

Yes, Kumari I’m ready to learn how to stop taking on other people’s stuff and feel EMPOWERED and ENERGIZED!

When I enroll in this special Sensitivity Home Study Course, I will receive:

Call recordings are conveniently posted on a secure web page so you can download to your favorite listening device. Perfect for listening to again and again!

10 Energy Alchemy techniques to help you clear, protect, and reboot your energy.

Listen in as I answer questions that come up as participants experience the new techniques. These may be the very same questions you have or ones you haven’t thought of yet, to help you can deepen your understanding of how you can fully anchor and apply the new energy tools to your situations. (Priceless!)

so you have the step-by step directions on how to practice calling in your energy field with a partner, and how to set up your sacred geometry (so cool!). (Value: $97)

All of this is YOURS when you register for the program today!

When you register, you’ll also get a bonus video: 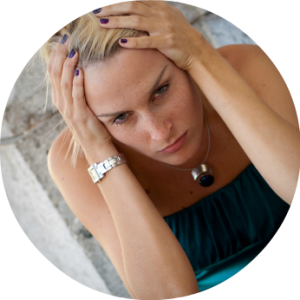 HEALING ANXIETY and WORRY and anchoring in Contentment and Calm ($97 value!)

During this 90-minute pre-recorded healing video, I teach you advanced-level healing techniques to raise your vibration and clear the energetic pattern of anxiety and worry that:

READY TO CLAIM YOUR SUPER POWER?

I sincerely hope you take advantage of this Sensitivity Home Study Course short-cut to claiming your Super-Power!

There is no longer any reason to spend one more minute struggling like I did, missing work, feeling depleted and miserable.

Registering is easy and we have some options available for you!

The Total Value of this program is well over $391

This could happen for you!

What a difference this course makes – I feel so supported!

Thank you, Kumari, for teaching and facilitating such a wonderful seminar for we sensitives! I’ve been using the rose in all the ways you showed us, and what a difference it makes! Grounding/earthing & connecting to my soul, & feeling so supported and contained in the sacred geometry has been amazing. I feel as though I’ve come home. That empty, searching feeling is gone. Wow!!

PS I would like to add that it has been easier to listen (esp. with challenging people) since I’m not so busy defending myself!

Just wanted to thank you for the wonderful healing sessions you have done with me. Very powerful. I believe the pain is only 1/100,000,000th what it would have been without your help. As well, I am filled with a newfound passion and commitment to my purpose on earth and my work. I feel better, more alive, focused and grounded. I am unblocked!! I believe I am now vibrating at a higher frequency where I create my reality with greater potency. I have noticed more synchronicity, inspiration and a higher psychic acuity. I thank you so much again. God Bless!

We’re so sure that you’ll love TRANSFORMING YOUR SENSITIVITY we offer this 100% money back guarantee. Use it for a full 30 days, and if at the end of that time you are not happy with it, just let us know and we will refund your full purchase price.

It’s that simple, but you do need to participate in the program and apply the techniques taught. If you still feel the program is not for you then simply send us a note and we’ll send you a full refund.

This site is for informational and educational purposes and does not provide medical advice, or medical or psychological claims or promises. The website is not a substitute for the information and care provided by your physician, pharmacist, and other health care professionals.